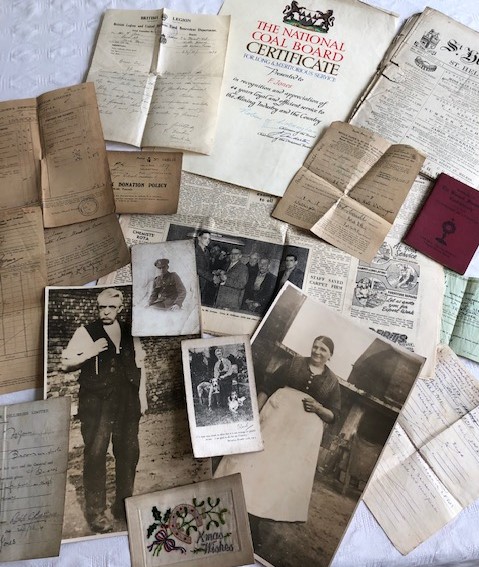 Rather than me write about this; I asked my hubby to do it, as it is his story after all...…. It was the morning of the dreaded sort out. The garage/office awaited packed to the rafters with old family heirlooms, memorabilia, furniture and all manner of junk. Emptying the expensive storage unit had seemed like a great decision, there was a holiday in what that cost to keep; however, looking at the huge mountain whose foothills met me at the door of our outbuilding, the wisdom no longer seemed so sound. Down at the storage facility it was out of sight - out of mind, no difficult decisions to make about what to keep, what to sell or what to throw. At 9.30am on a sunny Saturday morning the prospect of a weekend of tackling emotions linked to all sorts of paraphernalia was just not appealing.

With trepidation I advanced on the pair of chairs and an old hardly used exercise bike which blocked my progress to the treasures lying beyond. Who knows, I thought to myself trying to bolster my flagging resolve; I may come across a painting just waiting for Fiona Bruce and the other fella to fight its cause with the Wildenstein Institute to have it include in the raisonnés and in the process make me a millionaire. Not to mention a turn on TV with the fragrant Fiona. Got to be worth it I figured, wrestling the awkward and cumbersome torture devise know as a stepper, out of my way.

The first box yielded Royal Family books and magazines saved by my Mum’s unflagging love of all things Royal. Sadly, passed now, I was sure I could feel her breath on my neck as she watched to see what I might do with these priceless artefacts of her life. I dutifully piled them up in a corner, not having the ability or the courage to pass sentence just yet. The next box contained some old school things and books, which must have been covered in time travel dust or something, as in an instant I was transported back some 40 odd years to another time and place. Much as Ebenezer Scrooge when the Ghost of Christmas Past whisks him off to his old school; a sudden glance at my watch informed me that I’d been sat on the floor enjoying my revelry for about half hour with nothing much done. Again no demon could have forced my hand to flap the black bag of doom open to receive my school remnants and I repacked them into the box with all due reverence. Pushing the box to one side, I reasoned that there would be plenty of stuff to fill my newly acquired roll of waste sacks, without the need to commit my scholarly efforts to the tip.

I looked back at the mountain now sporting a slight indentation in its North Face and spotted an old metal trunk. This was an item that had been around for as long as I could remember, being gifted to my parents when I was very young, by one of those elderly ladies whom as youngster you called Aunty. I pulled the trunk out as I seemed to remember I’d stored some reprinted editions of World War Two papers in it in my teens. On lifting the lid sure enough there they were and I commenced the pleasant activity of taking them out and having a good old rummage through them. ‘Britain’s first day of war and Winston Churchill is new navy chief” screamed one headline. Stirring stuff indeed; however right at the bottom of the trunk a large plastic wallet had caught my eye. With a restrained eagerness Indiana Jones would be proud of I gently pulled the item clear and examined the contents.

To my intense surprise and excitement it was a pack of old documents relating to my Grandad, his service in the Great War and his time with the National Coal Board as a banksman. These had lain completely forgotten for over 40 years, with the memory of putting them in there following his death flooding back to me. I bolted for the house clutching my rediscovered treasure, shouting for my wife Grace to come and take a look with me. She being the Grace of Grace Ancestry, she was as equally excited as I and we both poured over the gems now spread out over the dining table. Included was a newspaper with a photograph of him being presented with his retirement clock by an austere looking fellow. I withdrew his long service certificate from its envelope blinking back a few tears of pride, holding it for Grace to look at as if it were the Holy Grail itself. We carefully picked over his Army documents and were delighted to find his regiment and number, something that had evaded my endeavours to discover more about this period of his life. Not surprising with a surname like Jones, but nevertheless had I remembered these old documents the search would have speeded up considerably, as it now has.

Like a child, I spent the rest of the day enjoying my rediscovered precious clues to my family history. The mountain would have to wait to be conquered, in our house everything stops for a fresh genealogical find.