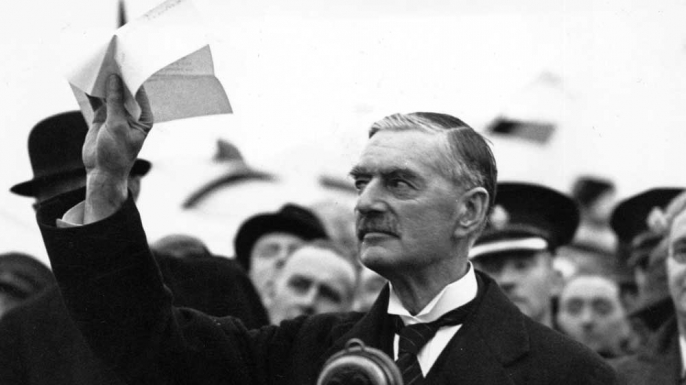 On this day in 1938 Britain's then Prime Minister Neville Chamberlain returned from a Munich crisis conference with Adolf Hitler. Waving a fluttering piece of paper in his hand, he would claim, as he stood at the microphone outside his recently landed aircraft, bore Herr Hitler's name and his own. This he said he believed would give us "peace for our time". History of course went on to show that he and the rest of the appeasers got it very wrong regarding Hitler and that far from delivering any sort of peace, the conference was just a prelude to a war on a scale of which the world had never seen before.

The 1930s are a fascinating period in British politics. Britain entered the decade as the world's only real superpower, in spite of the damages inflicted by the Great War. Clearly the Empire was weakened and trade badly disrupted by what had happened during 1914 to 1918; however Britain was still the preeminent nation on Earth with an ability to wield power and influence. It is against this backdrop that the noble concept of disarmament and appeasement was born. The horrors of the Great War were still very real to many and to many in power, who had either served themselves or been in administrative and executive positions. A real sense of 'never again' pervaded the whole of British life and an urgency to educate the world in the paths of peace took hold.

Neville Chamberlain was one of the leading appeasers of his time, certainly the most famous, in particular for his actions on today's date 78 years ago. He held firm that all dictators could be reasoned with and that through negotiation, peace could be maintained. He had driven through a comprehensive program of disarmament, in part to redirect funds to better use in Britain for his social reforms and in part to demonstrate to the world the futility of arms. There is no question as to the noble source of Chamberlain's ambitions; however time and time again Hitler was to frustrate him in reneging on or breaking agreements. The Munich conference of 1938 was to prove Chamberlain's last attempt to save Europe from disaster.

Whilst it is certainly true that Chamberlain believed in what he did, his policies and that of his fellow appeasers were to prove flawed. Appeasement rested on the principle of honour and the greater good, it naively postulated that if everyone was given some of what they sought, then everyone would be happy. The Munich conference was not only a prime example of appeasement's inability to work, but was the direct opposite of one of its prime tenants - honour! In order to appease Hitler, Chamberlain used British power and influence to place the Czechoslovakian Government and the French Government under pressure to capitulate to Hitler's demands to occupy the Sudetenland, effectively ceding a large part of Czechoslovakia to Germany.

Such was the desire in Britain for peace, Chamberlain's 'peace for our time'  was embraced and celebrated with enthusiasm and the nation breathed a sigh of relief. Churchill was the most prominent of the lone voices speaking out against appeasement and said of the Munich conference and the subsequent agreement, "This is only the first sip, the first foretaste of a bitter cup which will be proffered to us year by year unless by a supreme recovery of moral health and martial vigour, we arise again and take our stand for freedom as in the olden time". These were unpopular sentiments at the time and though Churchill was beginning to sway public opinion, he faced criticism for his stance against the Prime Minister. Just under a year later events were to prove Churchill right in his warnings of the consequences of disarmament and appeasement.

As a social historian and genealogist I often wish it would be possible to know what our family ancestors thought in any given situation or time. I wonder what view point the members of my family living through this event and others would think. With the above, would they be with the bulk of the population and be delighted at what they believed Chamberlain had achieved or be supportive of Churchill's opposite view. Whilst it is possible to assume much from an ancestor's social status or background, unless they leave behind documentary evidence of views or intentions one cannot be entirely sure of a given person's convictions. Sometimes the detective must make do with assumptions and speculations.